It's been a busy couple of weeks so it really is nice to have a lazy day.

The first one of these in a little while, huh? I got a pack of pocket-sized and keyring-able coloured sharipes the other day, and felt like scrawling something with them.

Actually, I think the primary cause of my dancing-to-The-Smiths dreams is Never Been Kissed, which I rewatched on Sunday (for maybe the 100th time). I love that movie to pieces and make no apologies for it. Well, listening to the Smiths made me want to watch that movie (c'mon...that climactic point prom scene), and watching that movie made me want to dance. An ongoing remediation of culture and consciousness.

Hourly Comic Day bears no resemblance to Hourly Quality Day (which is a day that I made up, just then, because it was convenient and fits in with what I'm trying to say...about how badly drawn these things were..seriously..I'm not too happy with them...but oh well!). Keep in mind that I was working most of the day and then out most of the night (yeah yeah, I know, so was everyone), so most of these were done in under 2 minutes and all were drawn straight on paper with a black ballpoint (no pencil). I now appreciate what an utter legend John Campbell is. You can see Hourly Comic Day comics that have been drawn by people all over the world at the forum.

dryponder, so I decieded to do one too. I think I like this one better than my Batgirl.

I went with the premise of a indie scenester/hipster type of superboy, complete with stove-pipe jeans, buttons, big belt, boots and a cigarette dangling from his mouth. And his cape sort of looks like a scarf. I thought it would be funny to dress him up like that because it was a play on semantics. You see:

and: kid = noun used to classify those in the 'indie' subculture</span>

This is what you call a syllogism! Hurray for words! And stereotypes! 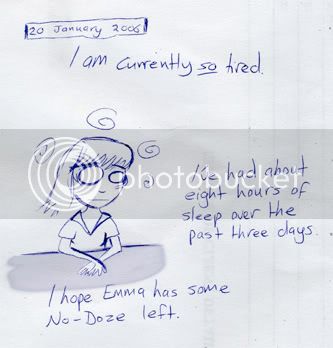 ...the internets (led by

himynameisjamie) is posting pictures they drew of their respective Batgirls. Who am I to resist a trend?

But both instruments happily go "feee".

(And then I stayed up to 3am watching Daria and drinking what was left at the bottom of a bottle of wine that was in the fridge.)
Collapse